Application programming interfaces (APIs), which enable applications to securely and easily share data and functionality, simplify the process of creating and improving the software.

What is an application programming interface (API)?

APIs allow companies to share data and functionality with external third-party developers, business partners, and internal departments within their organisations. This allows services and products to communicate and leverage each other’s data and functionality through a documented interface. Developers just utilise the interface to interact with other goods and services; they are not required to understand how an API is developed. Many of the most popular online apps today would not be viable without APIs due to the exponential growth in API usage over the past ten years.

You can streamline the process and manage existing tools while also developing new ones with the aid of an application programming interface. The following are only a few of the major advantages of APIs:

Improved collaboration: The typical organisation utilises more than 1,200 unconnected cloud apps. APIs make integration possible, allowing different platforms and apps to connect without interruption. Businesses may streamline procedures and enhance teamwork with this connection. Without APIs, many companies would have information silos and a lack of connectedness that would impair productivity and performance.

Innovation is made simpler because of APIs’ versatility, which enables businesses to connect with new business partners, provide new services to their current market, and eventually enter new markets.

Simpler innovation: Businesses now have the freedom to connect with new business partners, offer new services to their current clientele, and eventually expand into new areas that have the potential to generate significant profits and hasten the digital revolution. For instance, Stripe started as an API with only seven lines of code. Since then, the business has worked with several of the largest corporations in the world.

Data monetization: To attract developers to their brand and establish connections with prospective business partners, many firms opt to provide APIs for free, at least initially. However, you may monetize it by selling access if the API provides access to valuable digital content. 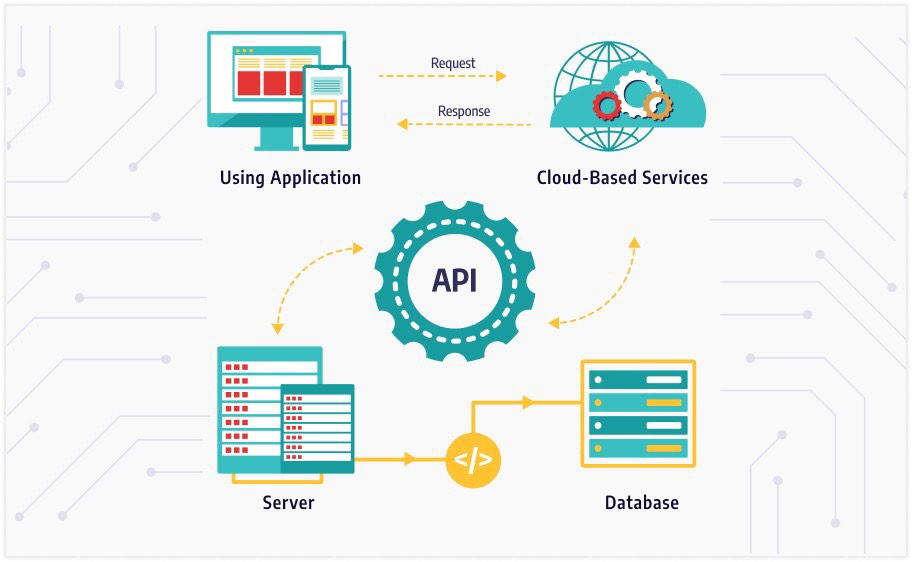 Several protocols have been established to give consumers a set of specified rules that specify the acceptable data formats and instructions as the usage of online APIs has grown. These API protocols make it easier to share standardised information:

SOAP (Simple Object Access Protocol) is an XML-based API protocol that allows users to send and receive data through SMTP and HTTP. Information sharing across applications or software parts that are operating in various contexts or that are developed in various languages is made simpler by SOAP APIs.

XML-RPC – In contrast to SOAP, which employs a proprietary XML format, XML-RPC uses a standard XML format to convey data. XML-RPC is older than SOAP but is simpler and more lightweight since it consumes fewer resources.

JSON-RPC – As remote procedure calls (RPCs), JSON-RPC is a protocol similar to XML-RPC, except it transfers data in JSON rather than XML format. Neither protocol is complicated. Calls may have several parameters, but they only need one to complete the call.

REST (Representational State Transfer) – A set of web API design concepts although there are no official standards for it (unlike those with a protocol). The interface of a REST API, also known as a RESTful API, must adhere to certain architectural standards. RESTful APIs can be created by combining the two standards, however, they are often viewed as competing ones.

A web service is a software that may be used by entering a web URL. Web services are therefore inherently dependent on a network. Every web service is an API since it exposes the data and features of an application.

An interface connecting to an application that may have been developed using any of the low-level programming languages, such as Javascript, was traditionally referred to as an API. The contemporary API often follows REST principles, uses the JSON format, and is constructed for HTTP. As a consequence, it produces developer-friendly interfaces that are readily accessed and comprehended by applications created in Java, Ruby, Python, and many other languages.

In a software design approach called SOA, the functionalities are divided up and made accessible as independent services through a network. The functional building blocks of SOA are often available using industry-standard communication protocols through the use of web services. Although developers can design these services from scratch, they often do so by making old system operations available as service interfaces.

An alternative architectural design that breaks a programme into smaller, autonomous components is called microservices architecture. It is simpler to test, manage, and grow the application when it is applied as a collection of independent services. This approach has become more popular as the cloud computing era has progressed since it allows developers to work independently on one component from the others.

In the modern world, it is essential to provide APIs that are useful. The creation of cloud-native applications depends on connecting a microservices application architecture through your APIs to share data with third parties, such as your clients.
The RESTful APIs are analogous to the common message framework that is utilised by the services in the microservices architecture to enable open operating system communication without the hindrance of extra integration layers or data conversion processes. Additionally, there is no effect on the other services whether you remove, swap out, or improve any service or feature. Ahead of greater API testing, speed, and scalability comes this lightweight dynamic’s enhanced cloud resource optimization.

The Microservices architecture is built to scale, giving developers and businesses the agility and flexibility they need to create, modify, test, and deploy applications at a granular level with shorter iteration cycles and more effective use of cloud computing resources. While SOA was an important evolutionary step in application development, it was not the only option.