There are several perks associated with Flutter:

Stateful Hot Reload lets you see your app alive in milliseconds. Build native interfaces in minutes with a set of fully customizable widgets.

2.A flexible and expressive user interface

Ensure native experiences for end-users are delivered quickly. Having complete customizability leads to exceptionally fast rendering, expressive and flexible designs thanks to the layered architecture.

Fast, easy experimentation, UI creation, feature addition, and bug fixed is possible with Flutter’s hot reload feature. The Dart Virtual Machine (VM) is updated by injecting updated source code files. The Flutter framework automatically rebuilds the widget tree after the VM updates classes with the new versions of fields and functions. This enables you to quickly see the results of your changes.

Reloading on the fly

Steps for hot reloading a Flutter app are listed below:

Use a supported Flutter editor or terminal to run the app. An actual device or a virtual one can be the target. The only Flutter apps that can be hot reloaded in debug mode are those in debug mode.
Make a change to one of the Dart files in your project. Hot reloading is usually possible for most types of code changes; a list of changes that require a hot restart can be found here.
You can save all changes using the Save All (control-s/control-s) option in an IDE/editor that supports Flutter’s IDE tools, or click the hot reload button.
Enter r in the terminal window if you are running the app via flutter run.

When a hot reload has been successfully completed in the console, you will see a message that looks like this:

You can apply changes to the app, but the existing state of the app is not affected. Your application continued to run as usual after running the hot reload command. The code is currently being updated and executed.

Why do hot reloads, hot restarts, and full restarts differ?

There is no support for hot reloading in Flutter web.

Flutter 2 has a new feature that allows you to automatically tidy up old APIs in your code by combining a Dart command-line tool and suggestions generated by the Dart analyzer.
As an additional feature, this is now available for Flutter (2.0) and Dart (2.12). The upgrade process is often called a quick fix (IntelliJ, Android Studio, Eclipse) or an action (VS Code).

A single fix can be applied using any supported IDE.

Deprecated APIs are indicated in the analyzer by a light bulb on the line of code concerned. You can update the code by clicking the light bulb. Updates are performed by clicking on the suggested fix.

A sample quick-fix in IntelliJ

Analyzers display errors when they detect deprecated APIs. Here are some options:
Click the Quick Fix link after hovering over the error. Only fixes are displayed in this filtered list.
Click the light bulb icon that appears when the caret is in the code with the error. Refactorings and other actions are listed here.
Including refactors in the list of actions can be viewed by clicking the caret in the error code and pressing the shortcut (Command+. on Mac, or Control+. elsewhere).

The command-line tool, dart fix, allows you to see and apply changes to an entire project.
Two options are available with this tool:

Building a web application with Flutter

You can begin using web support by following the steps on this page:

You need the following software to create a Flutter app with web support:

Set up a new web-based project 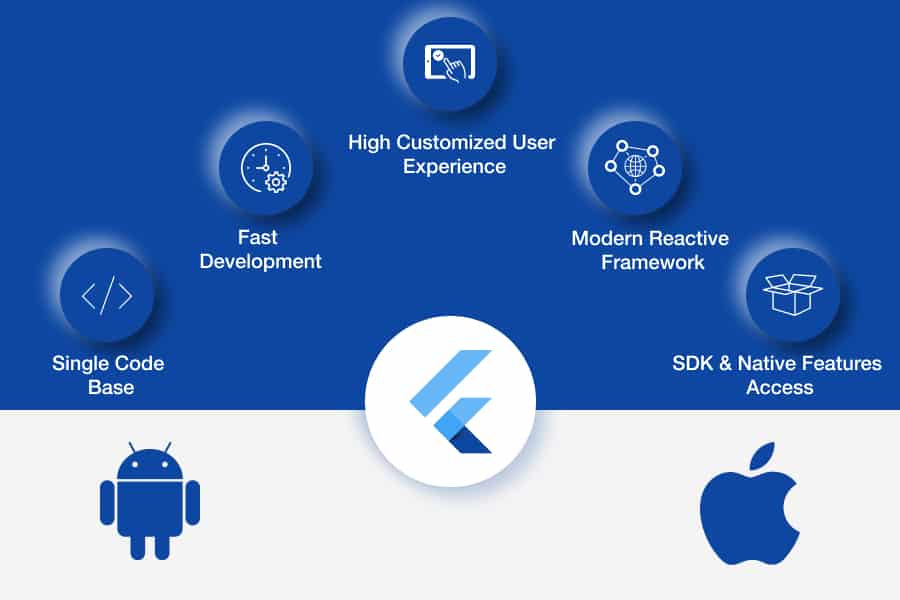 You can create a new web-supported project by following the following steps.

You can use the latest version of the Flutter SDK by running the following commands:

A Flutter device generates a Chrome device, which runs your app in the Chrome browser, as well as a Web Server, which contains the URL of your app.

In the pulldown list of your IDE, look for Chrome (web).

Flutter projects can be created based on any platform, not just the web.

Your IDE can automatically create iOS applications and Android apps as well as web apps when you create a new app. Choose Chrome (web) from the device pulldown and launch your app in Chrome. (MacOS too, if you’ve enabled desktop support.)

Run the following commands, substituting myapp with the name of your project, to make an app that supports web use (in addition to mobile).

Enter the following on the top of your package to serve your app from localhost on Chrome:

Build
Create a release build by running the following command:

Rather than using the development compiler, we are using dart2js (instead of the native compiler). Alternatively, you can use the release mode with Flutter run (flutter run –release). In this case, it populates the build/web directory with the built files, including the assets directory, which must be served together.

An existing application can be enabled for web access

The following command should be run from the project directory of an existing Flutter project to add web support: